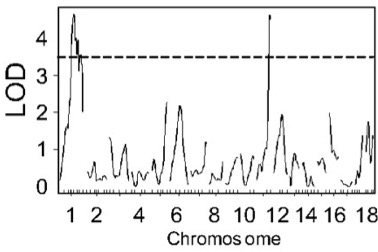 
FoxP3(+)CD4(+) regulatory T cells (Tregs) play a key role in the maintenance of peripheral self-tolerance, and it has been suggested that diabetes-susceptible nonobese diabetic (NOD) mice are defective in the generation and numbers of Tregs. We found thymic selection of Tregs to be under genetic control. Fetal thymic organ cultures on the NOD background required 3- to 10-fold more antigen than corresponding cultures on the B6 background for optimal induction of Tregs, but once the threshold for induction was reached the NOD background yielded close to 10-fold more Tregs. This increased selection of Tregs was also found in nontransgenic NOD mice in fetal through adult stages. This trait did not map to the MHC, idd3, or the chromosome 3 (Chr3) regions that control clonal deletion, but mainly to two regions on Chr1 and Chr11. Thus, NOD mice do not have a global defect in the generation or maintenance of Tregs; if anything, they show the opposite.