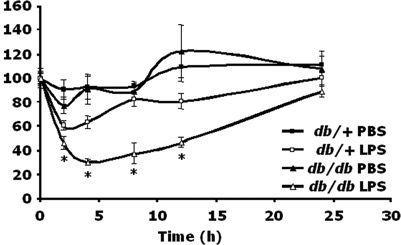 
Chronic inflammation appears to play a critical role in type 2 diabetes and its complications. Here we tested the hypothesis that this inflammatory dysregulation affects the IL-1beta system and has functional consequences in the brain. Diabetic, db/db, and nondiabetic, db/+, mice were administered i.p. LPS, a potent cytokine inducer, at a dose of 100 microg/kg/mouse. db/db mouse innate immune-associated sickness behavior was 14.8, 33, 44.7, and 34% greater than that of db/+ mice at 2, 4, 8, and 12 h, respectively. When a fixed dose of LPS was used (5 microg/mouse), db/db mouse sickness was again enhanced 18.4, 22.2, and 14.5% at 4, 8, and 12 h as compared with db/+ mice. In diabetic mice, peritoneal macrophages produced more IL-1beta in response to LPS, and peritoneal levels of IL-1beta induced by LPS were increased. Importantly, IL-1R antagonist and type 2 IL-1 receptor (IL-1R2) failed to up-regulate in response to LPS in db/db mice. Finally, both peripheral and central administration of IL-1beta, itself, induced sickness in db/db mice that mimicked the effects of peripheral LPS and was significantly greater than that seen in db/+ mice. Taken together, these results indicate that IL-1beta-mediated innate immunity is augmented in db/db mice both at the periphery and in the brain, and the mechanism is due to diabetes-associated loss of IL-1beta counterregulation.